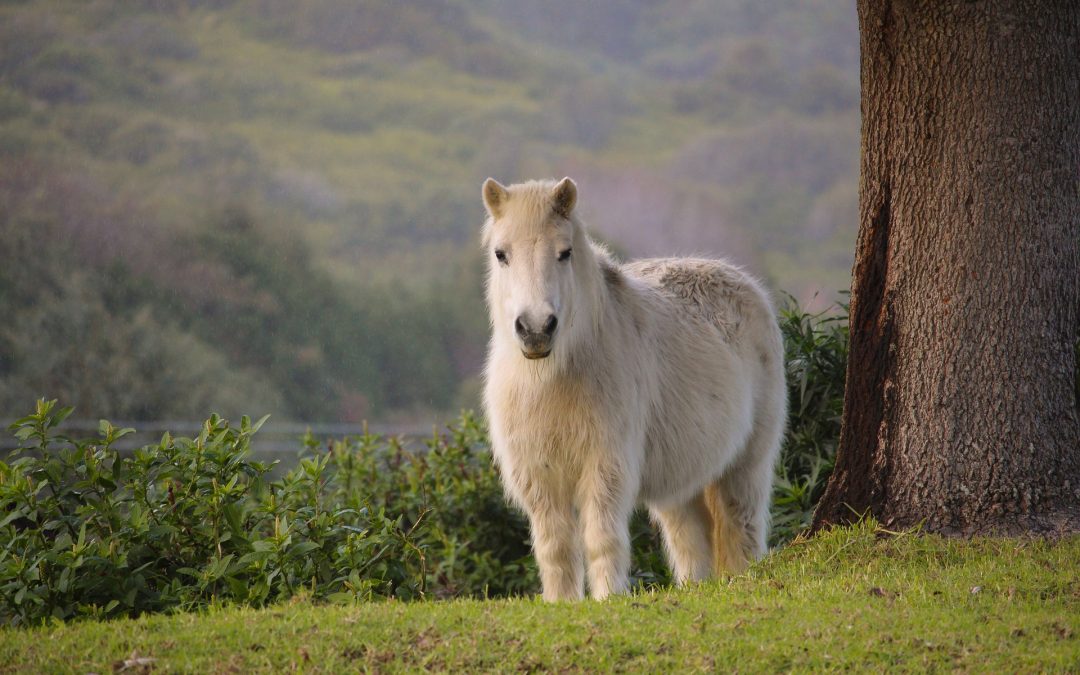 One thing I have learned in animal communication is the absolute necessity of heart. This may seem an obvious statement to some but I would still like to share the following story which I hope you will agree reveals this simple truth. This story is a wonderful demonstration of the tremendous connection that is possible between the human animal and animals through the power of animal communication.

Over ten years ago, I shared my life with two native ponies and one old horse. Now those of you who have ever had dealings with native ponies or who have ever been responsible for their care will understand that it is a responsibility which weighs heavy upon the heart. Native ponies, by virtue of their evolution, are entirely unsuited to lowland pasture and are evolved to be atop a windswept moor above what would be the natural tree-line. Here they graze upon rough tussocks of poor grass to which they are adapted.   Then along came our early farming ancestors who took it upon themselves to remove acres of woodland, creating fields for livestock to graze as well as to grow crops. This set up was presumably great for oxen but not so good for our native ponies.

My ponies lived on rich beef grazing and shared their pasture for half of the year with a herd of cattle. As it turned out this was a nightmare for me.   In the spring as the fresh rich grass began to push through and creep towards the fearful height of my lower ankles, I would begin to feel twitchy. This grass which is delightful for all of us at the first greening of spring was, unfortunately for my ponies, very high in sugar. It is exactly this grass which is the cause of the dreaded laminitis, a disease which can be devastating to a horse or pony.   Laminitis makes their feet so painful that they will often be seen standing in strange postures or spending more time than normal lying down. This flush of spring grass can make ponies so lame that it sometimes becomes necessary for them to be put down.    It is for this reason that each spring my ponies had to be contained in the grimly entitled ‘starvation paddock’. A starvation paddock is essentially a small area where their grazing is restricted.

What has this got to do with animal communication? You may be wondering. Well, I can assure you that my ponies did not take too kindly to this. Neither did my old horse, Apollo who, as herd leader, was responsible for taking his herd to the best grazing. A canny old beast, he was adroit at knocking down the fencing between the starvation paddock and the rest of the lush ten acre field.   And to this end, one fine day at the latter part of spring, his cunning plan had come to a successful conclusion. He managed to knock down the fencing between their small paddock and persuade the ponies to take a gambol in the big ten acre field where the farmer was grazing a herd of cattle including, as it turned out, a very nasty bull. This meant that it was far too dangerous for us to go and catch the ponies who were now happily filling their bellies with the best beef grazing imaginable alongside a large herd of cattle. What a disaster!

Now my husband was a third generation dairy farmer who knew plenty about cattle and was taking no chances with the large red bull who had claimed the remaining acreage as his rightful territory. “Whatever you do, don’t go into that field. That bull is spiteful.”   To say I was worried was an understatement. Nothing could persuade those ponies back into their paddock. No laden bucket with juicy carrots, no scent of sweet apple would lure them back in.

That night, tired, exhausted and frantic I went to sit outside my house under the stars. I had not been practising the art of animal communication for long at this stage of my life but I was desperate and had nothing else in my arsenal. I stilled my mind and became centred. I imagined Apollo and the ponies standing in front of me. I directed my intention and thoughts with the energy in my heart and belly at these three equine forms standing before me.

“IT IS NOT SAFE!” I said silently.

“THE PONIES’ FEET WILL BECOME REALLY PAINFUL. THE BULL WILL HURT US (HUMANS). I CANNOT COME AND GET YOU. YOU MUST BE STANDING BY THE FENCE IN THE MORNING OR YOU WILL BE ILL!”

This animal communication chastisement went on for many minutes. Eventually exhausted I retired to my bed.

In the morning I had the strongest knowing that that those ponies would be by the fence despite all logical analysis of the situation. I crept out into the garden hardly daring to cast my eyes up the hill to where I hoped they were standing. And there they were, those blessed ponies, patiently standing up to their knees in the most beautiful green spring grass!

I disallowed my inner cynic to run with this information and casually embraced my inner certainty that animal communication could be applied in this way.

I walked slowly to the electric fence gate, my heart secretly in my mouth, in as casual manner as I could muster. I quietly opened the gate and the three equines stared at me with the most memorable look that I have ever seen on a horse face. It was a mixture of the deepest resentment coupled with extreme self-pity.

Not one of them volunteered any movement. I begged, I pleaded, I cajoled, I admonished. I rattled buckets, I laid out lines of carrots. To no avail. Just as I was losing hope in the power of animal communication, I felt myself soften and connecting deeply to my centre and my heart, I silently said, “Please come home.”

At that, and to my great astonishment, all three of those horses trudged resentfully through the gate and back into their tiny paddock of short grass. Home.

I did not renege on the deal that I had struck which was to promise to move the electric fence a few inches a day so that they could have a small strip of fresh grass each and every day if they agreed to return to their starvation paddock.